A low point for the monarchy, in a new season of the Crown

It is 1991 in Britain. At Buckingham Palace, Queen Elizabeth II, now a venerable 65, is settling in to her 39th year on the throne. At No 10 Downing St., Margaret Thatcher is gone, savagely defenestrated a year earlier by treacherous members of her own party. Her replacement as prime minister, the dully ineffectual John Major, has failed to repair the sclerotic economy, which has slid into recession. It is an uncertain, unexciting time.

This is where we find ourselves as “The Crown” enters its fifth season. As is so often the case with this much-watched, much-discussed and often-derided series, the new episodes have already prompted angry complaints from critics who say they distort the historical record by inventing conversations, motivations and behavior. The main objection so far is that it is wrong to suggest, as the first episode does, that Prince Charles (played by Dominic West) ever tried to persuade the prime minister (Jonny Lee Miller) to force his mother to abdicate so he could take her place.

Stirred into rare public indignation, Major, who left the premiership in 1997 and is now 79, issued a statement denouncing the suggestion that any such conversation took place as “a barrel load of nonsense.” In The Times of London, actor Judi Dench piled on, saying that the series was at times “cruelly unjust to the individuals and damaging to the institution they represent.” She urged Netflix to attach a this-is-not-true disclaimer to each episode. (Netflix marketing describes the show as a “fictional dramatization,” but the episodes themselves carry no disclaimer.)

More recently, another former prime minister, Tony Blair, who succeeded Major in 1997, denounced a later scene in which he (played by Bertie Carvel) is asked to help smooth the way for the now-divorced Charles to set aside his parents’ objections and marry his girlfriend, Camilla Parker Bowles.

“It should come as no surprise that this is complete and utter rubbish,” a spokesperson for Blair told The Daily Telegraph.

The season begins streaming Wednesday, when viewers can judge for themselves what rings true, what feels ridiculous and how much they are willing to suspend disbelief. (For instance: Though Elizabeth Debicki is uncannily persuasive as Princess Diana, does it matter that, at 6 feet 2 inches, she looms over virtually everybody else onscreen? Discuss.)

But there is no arguing with the underlying premise that the depressing early 1990s in Britain was an uncertain time for the monarchy. The era of reference was over. No longer could the Windsors depend on the goodwill of the tabloid press, which began to treat them — often with Diana’s covert assistance, as she cannily promoted her own narrative — as players in a royal soap opera. The royal family found itself in the awkward position of having to make the case for its own relevance. 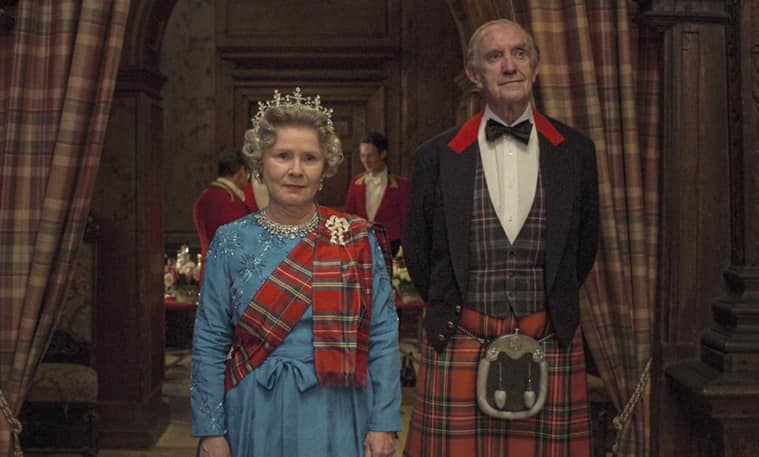 Imelda Staunton as Queen Elizabeth II, left, and Jonathan Pryce as Prince Phillip in a scene from “The Crown.” (Netflix via AP)

As her reign endured into the 21st century, Elizabeth would, of course, become wildly popular, a towering, much-beloved figure who provided a link to a bygone era of duty and stoicism and reflected Britain’s best view of itself. But in 1991, the very values ​​that would later make her so respected seemed old-fashioned and stodgy. In a Gallup poll three years earlier, 59% of Charles said they felt that Elizabeth should give up the throne in favor.

As the first episode of Season 5 notes in a witty montage, being the queen was boring in a way that most of Elizabeth’s subjects could not appreciate, because they never saw the drudgery behind the finery. Much of her time was spent on worthy but paint-dryingly tedious activities. (“The Crown” has her addressing the Milk Marketing Board on the subject of its new “state-of-the-art dairy complex.”)

Her very appearance, which later would be comforting in its familiarity, as much part of the national furniture as the pound notes on which her image appeared, then seemed to shriek “irrelevant.” Her youthful style had given way to matronly suits, sensible shoes, quaint hats and an immutable, immovable gray coiffure.

Accused in “The Crown” of suffering from “Queen Victoria Syndrome” — clinging to the throne past her sell-by date — Elizabeth (Imelda Staunton) declares that she takes the comparison to her great-great-grandmother as a compliment.

“Attributes people use to describe her — constancy, stability, calm, duty — I would be proud to have describe me,” she says.

But as viewers are about to see in this season, the surface calm masked underlying turbulence. The seeds of discord and trouble had already been planted; they were about to grow out of control.

At the time, Elizabeth had been married to Prince Philip for 44 years, a steadfast union that would endure until his death in 2021. It survived vague rumors that Philip was occasionally unfaithful, in the way of upper-class men of his generation — in His case is supposedly fueled by his sense of impotence at being constitutionally inferior to his wife. (The new series has also provoked criticism by making much of his “friendship,” as he describes it, with Countess Mountbatten of Burma, a beautiful young aristocrat played by Natascha McElhone, who introduces him to the spicy sport of carriage racing.)

The Windsors’ oldest son, Charles, the Prince of Wales, carried with him a perpetual air of Hamlet-like melancholy. His biggest asset was his glamorous wife, Diana, whose superstar presence had infused the monarchy with excitement, sex appeal and, thanks to her hands-on charity work, a sense of connection to regular people.

Too bad Charles couldn’t stand Diana. Or that his longtime affair with Camilla, then married to her own longtime husband, was about to burst into the open in a series of embarrassing ways, such as the leaking, in 1993, of the infamous tape in which he fantasized excitedly about being her tampon. (After Diana’s death, of course, Charles and Camilla would eventually marry; they are now the king and the queen consort.)

It was also too bad that Diana was wildly unhappy, a volatile character in a doomed marriage who used the tabloids to promote the case that her husband’s infidelity and general contempt made her more sinned against than sinning (despite having several affairs of her own). She was poised, too, to secretly cooperate with Andrew Morton, a tabloid reporter determined to blow the lid on the Wales’ terrible marriage.

The Crown Season 5 is set to arrive on Netflix on November 9. (Photo: Netflix via AP)

His book, “Diana: Her True Story,” which carried shocking tales of mental illness, suicide attempts and adultery, was published in 1992. It caused consternation at the palace and anger in Parliament. It also led the couple to formally announce their separation. Charles soon cooperated with a biographer of his own, Jonathan Dimbleby, in an effort to shore up public support.

Meanwhile, the queen’s daughter, Princess Anne, an accomplished equestrian who competed in the Olympics and became the tireless patron of numerous charities, was also having an affair. In 1992, she divorced her longtime husband; several months later, she married Cmdr. Timothy Laurence, her lover and a former equerry to the queen.

Prince Andrew, the ebullient third child — his nickname was “Randy Andy” — had served with distinction in the Falklands War and brought some apparent jollity to his staid family by marrying Sarah Ferguson, a full-of-fun redhead known as Fergie. Like Diana, Fergie chafed at the restrictions of being a royal wife; like Diana, she had a series of affairs. (Were any of these people faithful to their spouses?) After photographs of her with a boyfriend were published in a tabloid, she and Andrew also announced their separation, in 1992. (There would be a second set of photographs, with a different boyfriend , later that year.)

As it happened, 1992 was the year that Windsor Castle, which dates to the 11th century and is the oldest occupied castle in the world, burst into flames. The fire eventually destroyed 115 rooms, including nine staterooms, and cost more than 35 million pounds — most of it raised by the crown, including through charging admission to Buckingham Palace — to repair.

Queen Elizabeth was rarely one to complain or make a fuss. So it was shocking when she opened a tiny window into her gloomy regal mood in a now-famous speech at London’s Guildhall in 1992, on the occasion of her 40th year on the throne.

So far that year, one of her residences had burned up, three of her four children had separated from or divorced their spouses, her own popularity was wobbling and her family seemed to be misbehaving itself into irrelevance.

It is sign of the queen’s discomfort with emotional self-disclosure that she used a kind of double negative, and then a Latin phrase, in summarizing her state of mind.

“1992 is not a year on which I shall look back with undiluted pleasure,” she said in the speech. “In the words of one of my more sympathetic correspondents, it has turned out to be an ‘annus horribilis.'”

She spoke with some sadness about the unkind comments leveled at her family and the monarchy, and begged the audience not to jump to instant opprobrium.

“I sometimes wonder how future generations will judge the events of this tumultuous year,” she said.

It is fair to assume that she could hardly have had “The Crown” in mind when she added: “I dare say that history will take a slightly more moderate view than that of some contemporary commentators.”